The paper presents results of a survey of residents' attitudes of Donetsk city and Donetsk region, which was conducted by the Social Research and Political Analysis Institute on 26-28 March 2014. The author interprets research results in the context of P. Sztompka's model of socio-cultural trauma, offering therefore potential behavioral scenarios of city dwellers in the aggravated political confrontation situation and developing recommendations for the Ukrainian central authorities as to prevention of an open civil confrontation in the Donbas.

The research results will unveil common myths of the total pro-Russian orientation of Donetsk (vice versa, 66% of the dwellers link their future with the reformed Ukraine); federalization as an idee fixe of Donetsk residents (the explicit minority is in its favor); willingness of the majority to become a part of Russia (the separatists account for about one third); lack of any significant number of Ukrainian patriots in Donetsk region. The author also draws a conclusion that mass consciousness of Donetsk residents is greatly traumatized by both political changes in the country and their interpretation by pro-Russian mass media dominating in the region; feeling threatened, called up fears, insecurity are breeding grounds for confrontation as well as kindling of radicalism and extremism. The author states that there is a relative balance between Ukrainian patriots and the pro-Russian fifth column, the majority of the dwellers taking a passive stand. 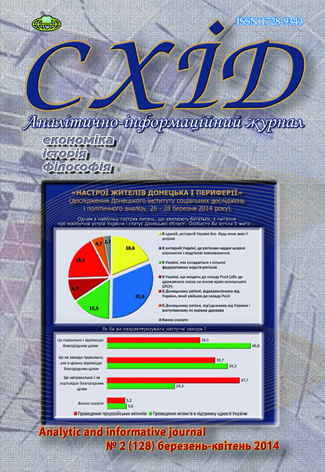